The interest in researching Burley in Wharfedale's football history was sparked by a sentence on the local team Burley Trojans FC web page, about the history of their club.

Wanted to know the year when Burley won the cup (& a little about the other two clubs they mentioned - Burley Grove United & Burley National School Old Boys). From the initial research, what became apparent was that much of the Burley Trojans version of the history wasn't correct.
​
It would have been a lot easier & whole lot less time consuming to just pick apart & amend what Burley Trojans had put & leave it at that, as its only a web page that can be changed. But wanted to know more ..................  the clubs, the grounds, the people - players, administrators, referees & anyone else connected to the game. Any images - individuals, team photos etc? Any artefacts or memorabilia that might be still around?
​
To understand the outline research results, it helps to know something about the history of football in England & the research problems that have arisen. Hence the two panels at the bottom of this page - "England Football History" & "Research Issues".

History of Football in Burley in Wharfedale

As with all the web pages under Burley Archive, this research project (& this webpage itself) is on-going, if you can help with any aspect of it, then please get in touch via the contact form.
​
Particularly interested in images, photos of local players, administrators etc., and family connections with any of the clubs and sports that have existed in Burley in Wharfedale & district, pre-1940.
(If you have anything sport related across all years that would be of interest too).

Struggling to come up with a narrative for the early years of association football in Burley in Wharfedale.

The men & women of Greenholme Mills & the surrounding district, were involved in all manner of sporting & recreational activities - athletics, cricket, pedestrianism (walking races), cycling & rugby etc. So its very likely that football in the form of the association code was played by them. It didn't require much to play the game in those early years - a field, a ball, two sticks to show the goals and a line to mark the extent of the pitch.  But so far drawn a blank on actual association football teams. 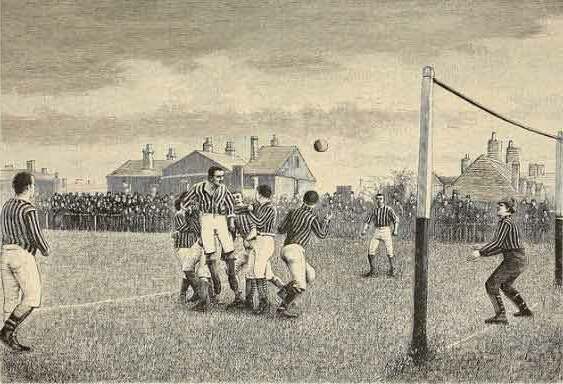 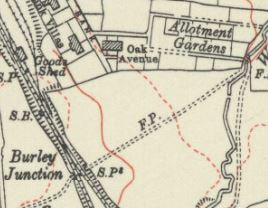 Oak Avenue Rugby Ground. Image courtesy of NLS Scotland.
Burley Old Football Club (c1894 - c1898) - junior side.
​Home ground: Oak Avenue.
Don't know where the ground itself would be - possibly where the allotments are now. Alternatively the ground could have been in Peasborough field - the site now of Burley Woodhead Primary School - with access via Oak Avenue.

(​Note:  Pre-war there's no promotion or relegation between amateur or semi-pro leagues & divisions - clubs applied to join any particular league or division, even where there might be two divisions in the same league. Their application could be accepted or rejected. Promotion & relegation only applies to clubs in the professional football leagues). ​
Burley Trojans FC
1938/39 season
Burley Trojans FC
1939/40 season
Burley Community Library, Grange Road, Burley in Wharfedale, West Yorkshire England LS29 7HD
Opening Times: Monday & Tuesday 10.00am to 5.00pm, Thursday 1.00pm to 6.00pm, Friday 10.00am to 5.00pm, Saturday 10.00am to 1.00pm.
Closed Wednesday & Sunday
Burley Archive: Drop-In sessions Friday 2.30pm to 4.30pm. Other times by appointment.
SITE MAP