For those things that don't fit any where else.

What is the location of this photograph by John Kirby Smith? 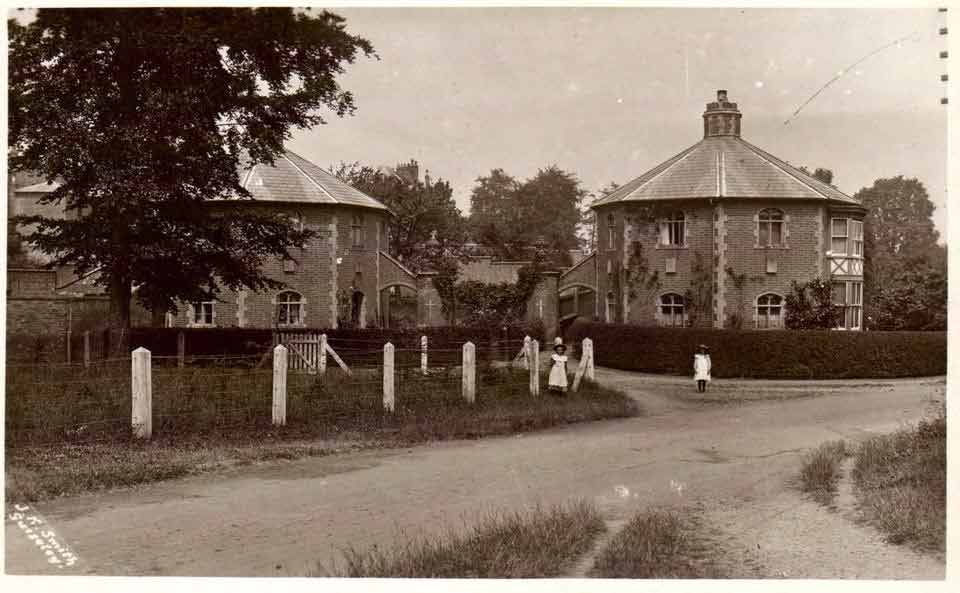 Octagonal Lodges c1910 by John Kirby Smith
John Kirby Smith had a studio on Station Road & also one at Albion House, Otley Road, Guiseley. He was active in the Guiseley, Otley, Rawdon & Apperley Bridge areas in the late 1890s to the 1920s.
John Kirby Smith was a tobacconist as well as a photographer, he had a wooden shop in Little London, Rawdon in 1894. Know this because George Airton a labourer from Rawdon, broke into it on October 8th 1894 & stole a quantity of tobacco, cigarettes & pipes, unfortunately for George (& good for us) he got arrested & charged. The local papers - Wharfedale & Airedale Observer (x3 reports) & the Bradford Daily Telegraph reported it.

But its possible that this image could be from anywhere within the UK.

​What can be said about the image?
Octagonal lodges are unusual in themselves, so to have a pair forming an entrance is notable. In the centre of the background, behind the trees, there appears to be the chimneys on a large property. Top right of the image are 5 dark marks - possibly the ends of the cross beams on a telegraph pole.
What about the religious crosses on the gateposts?
​If you have any thoughts about the image please contact the webmaster.

How long does it take to survey & build a railway line?

Noticed on the OS 6 inch map of 1851 (surveyed in 1847 to 1848) that the Otley & Ilkley Joint Railway is marked with all the junctions, stations etc. Yet the actual railway didn't open until 1865. I'm puzzled by the time difference of 18 years.
Each section of the railway required its own Act of Parliament, would this account for the railway being marked on the map, but not actually existing on the ground? Or did it actually take 18 years to survey & acquire the land & then build it.
If you know the answer contact the webmaster.
Burley Community Library, Grange Road, Burley in Wharfedale, West Yorkshire England LS29 7HD
Opening Times: Monday & Tuesday 10.00am to 5.00pm, Thursday 1.00pm to 6.00pm, Friday 10.00am to 5.00pm, Saturday 10.00am to 1.00pm.
Closed Wednesday & Sunday
Burley Archive: Drop-In sessions Friday 2.30pm to 4.30pm. Other times by appointment.
SITE MAP