Brief history of the people who transformed "Green Holme" from fields to the textile manufacturing centre of Greenholme Mills.
This is on-going research (& page layout), if you can help with any aspect of it, please get in touch via the contact form.
Greenholme Old Mill, the weir, embankments and the first goit was built by a group of four partners: George Merryweather, Jonas Whitaker, Richard Paley & Thomas Davison in c1790.
Research questions: Why site a cotton mill at "Green Holme"? What was there in c1790 to persuade the partners that this was a good place to build?
​Possible answers could include:
1. The fall of the river across this section of the valley.
2. Local knowledge: one of the partners, George Merryweather was renting Burley Hall. He'd married Mary Whitaker (sister of Jonas Whitaker) in 1793 & they were there when all the lands etc of Burley Manor was put up for sale in 1795.
3. It was the last place on the River Wharfe that could be used. Both upstream & downstream all other possible mill sites had been taken up.
What did the partners need to construct?
​Was the horse-shoe shaped bend in the River Wharfe already there or did they create it?

1775 Jefferys map - Wharf River & Burley. Image courtesy of Burley Archive.
The Jefferys maps of Yorkshire from 1771 and 1775 don't show the marked loop of the River Wharfe at Greenholme that we see today.

Was the first mill (Old Mill) built on the 1790 line of the river? The river was then canalised (i.e. the goit) & raised embankments on both the south bank & north bank built, a timber weir was then constructed upstream to make use of an old river channel (i.e. the loop) to act as an overflow channel (now the current river alignment).

This is a time near the end of the age of canal building where digging channels, changing courses of rivers, building embankments etc., is child's play for the civil engineers of the day.

On both the 1851 and 1934 OS maps there's an undefined boundary that runs through Brown's Holme. Boundaries tended to follow rivers, that suggests that the river is in a different place now than it was when the boundary was made.

In addition could anything be said about the contours marked on both maps?
The 200ft contour exactly matches up with the top of the stone weir & follows the top of the south bank & the sides of the tail race of New Mill. The 225ft contour passes diagonally across Greenholme from Wharfeside to New Mill.

An unusual view below of Greenholme & the River Wharfe courtesy of Houseprices.io The image uses Lidar data from the Environment Agency. 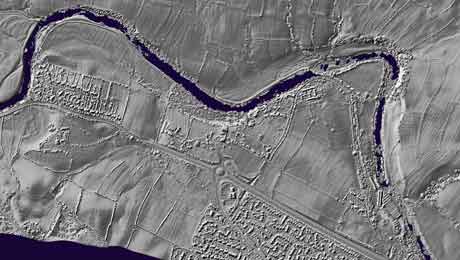 River Wharfe at Greenholme - Lidar 1m DSM Data. Image courtesy of https://houseprices.io/lab/lidar/map
The embankments on both the north & the south bank upstream of the weir, show up really well on this image. The old line of the river through Brown's Holme, likewise.
Greenholme Weir
The original weir was built of timber.
According to the account of Henry Whitaker (son of Jonas Whitaker) in his diary printed in 1889 - "I well remember the old weir at Greenholme. The top or upper part of was made of strong planking, and this was propped by substantially-made beams. Over this planking the water fell a distance of 3 or 4 feet on to an inclined stone platform, which sloped down to a square wooden sill made of strong balks, and extended across the river. From these balks there was a drop of about a foot or eighteen inches into a deep pool ..."

In the winter of 1814-1815 the upper part of the timber weir was washed away by a combination of ice & high river levels.
​
​Hiram Craven (1779-1842)(Craven, Whitaker & Nowell partnership - Samuel Whitaker (c1783-1821), Joseph Nowell (1784-1836)) was contracted to build a new one.​
Construction of a stone weir (or stepped spillway) began in the summer of 1816 & was completed in the spring of 1817. The stone was quarried from Burley Moor around Coldstone Beck above Burley Woodhead. This curved stone spillway is the one we see today.

About 50 yards downstream a concrete sill (or mini weir) was built at the same time as the main weir & its apron. This was constructed across the full width of the river, to create a stilling pool to protect the apron from scour & erosion.

It was a number of years later when it was discovered by the mill owners, that at times of high flow or flood conditions that the sill was the cause of increased erosion of the north bank.

The solution:
Cut-water stones aka the Stepping Stones
These were laid, to be underwater, along the top of the sill to redirect the flow of water back to the centre line of the channel.
​When Greenholme Mills was working & drawing water from the river the flow over the stones could be so low that the locals used them to cross the river. In time they became an accepted way of crossing the river, rather than the ford that is around 50 yards downstream.
​
Note: The mills didn't divert all the water, all of the time. Though the New Mill was the largest water powered mill in England, it was never wholly reliant on the river for power. Over the years they had a fine collection of standing steam engines.
​
The River Wharfe on this stretch is known for its gravels. Gravels and water wheels or turbines don't mix well nor do they have a beneficial effect on masonry. To maintain equipment & the goits, the weir boards were dropped, the sluice gates closed & the by-pass channel within the mills was opened to allow the water to escape back to the river.
This meant the full flow of the river would return to the main channel. The sill, the stones, the stilling pool & the north bank armour would then come into their own protecting the apron & the weir from scour & erosion.
​ 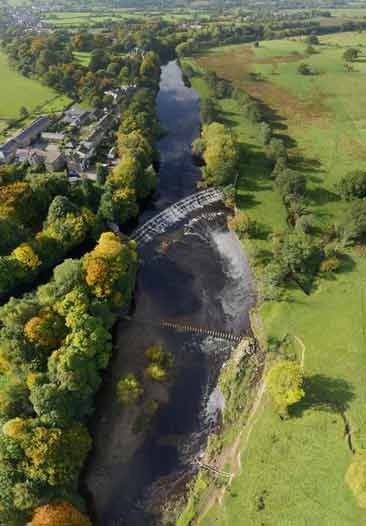 Greenholme Weir, stilling basin & cut-water stepping stones on River Wharfe. Image courtesy of David Bond.
Greenholme Weir Boards
To raise the river level during times of low flow, a series of weir boards was raised along the top of the weir. The boards were made of planks of wood connected by wrought iron.
The single board illustrated below & its wrought iron attachments measures about 1.8m x 0.5m & is about 12cms thick. Exactly how many boards there were & what mechanism was used to raise (& lower) them into position is unclear at present. 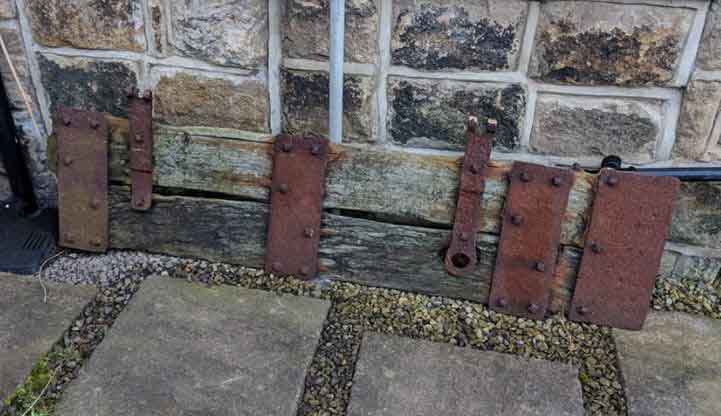 Greenholme Weir board propped up at Burley in Wharfedale. Image courtesy of Alex Baxendale.
A few years ago a local resident, Alex Baxendale, managed to retrieve one of the boards from the River Wharfe. The board is now in the possession of Burley Local History & Archive Group, who are now looking for help to preserve & display it. If you can assist them please use the contact form.
The Greenholme Mills Partners
The Greenholme Mills Buildings
1872
Parts of the New Mills were demolished & replaced with a much larger mill on the same site. The power for the mill came from the Wren & Bennett water wheel of 300hp , a water turbine of 200hp & a steam engine of 200hp. This mill is the one we now call Greenholme Mills.
​
c1880s
​Hydraulic power installed for a range of hoists and cranes.
This consisted of an accumulator or cylinder weighing 40 tons which exercised a pressure of 800lbs per square inch on water conveyed in strong pipes throughout the works. Whenever a hoist or crane was set in motion, the accumulator would begin to fall. Automatically a steam engine called "Sisyphus" would start & force it up again.

​The secondary circuit lit the offices, staircases, passages etc. This "Pilot" circuit was completely independent of the main one. It was driven by two more steam engines called "Fulmen" & "Lucifer". The works were lit by 1300 lamps.
1895
​The large water wheel & the Mac Adam turbine in the New Mills were replaced by two 42 inch Hercules Turbines of approximately 250hp each & one Hercules Turbine of 48 inches of approximately 310hp. The fall was 21ft.
​
In the case of low water two steam engines were employed to supplement the power. They went by the names of "Victoria" & "Iris".
Victoria, for its part, could be coupled with either one or two of the turbines even while they were running at full speed.
​
The one aspect of the manufacturing process that the owners don't appear to have done on site was the dyeing of the yarns and cloth.
The Greenholme Estate
​​
"Greenholme" - Palladian Mansion or House or Villa, Burley in Wharfedale
Wharfeside, Leather Bank, Burley in Wharfedale
1926 Aerial Photographs of Greenholme Mills
Out of thousands of images, the only 2 photographs of Burley in Wharfedale on the Britain from Above database, are both of Greenholme Mills.
Bond Aerial Images was asked to reproduce a similar image to the ones above.
​The result taken in February 2018 is below.
Our first thought on seeing it, was sadness, what a waste, so much destruction of such an historic site.
Greenholme Mills had the potential to be a smaller version of Salts Mill, Saltaire or Dean Clough at Halifax, now to be just more housing. 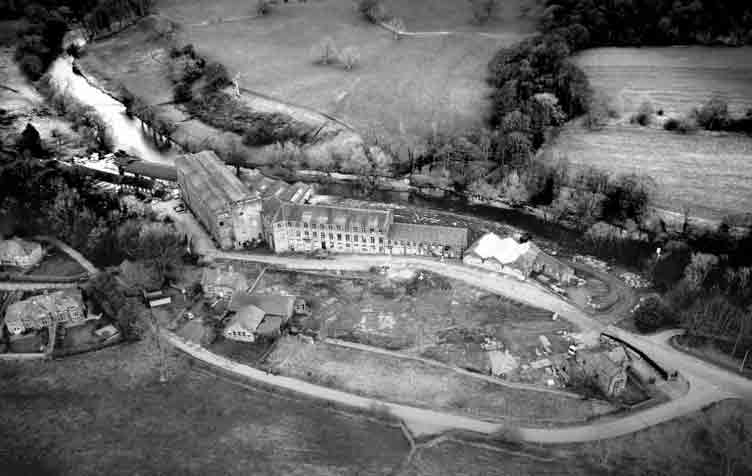